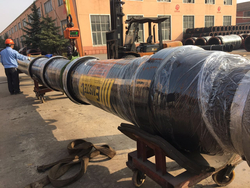 Throughout December last year to February this year we were busy with an order of 20'' double carcass subsea hoses c/w float collars for the Pakistani Oil Market.

Delivery time was the key challenge as the first batch was supposed to be installed in January, before the monsoon season. We made it though and the hoses are already in operation. The picture shows one of the end reinforced hoses with collars just on one end during the bending test.

Another task was to define the amount and location of floats for the Chinese Lantern Configuration. For this we used the software Orcaflex which we also use for our Seawater Uptake Systems. Different parameters like tide and current of the ocean but also stiffness and weight of the hoses can be simulated and with that the buoyancy needed for the intended shape.

Third party inspection was done by Bureau Veritas at our facility with satisfying results and at the moment the second batch is on the way to the client.